The large-scale purpose-built venue opens in
August and will be the new and exclusive home of Bongo’s Bingo. From the 9th of August, special guest Kelis will open the venue. All Saturday shows have already sold out, with Fridays tickets almost gone!
Content will feature regular shows, gigs, events and markets from some of the region’s taste-making pioneers and community-led projects
Part of the site will also feature reconditioned shipping containers, featuring food and drink from independent retailers. 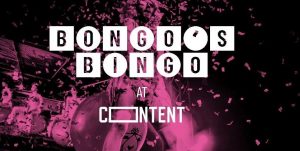 Content is a brand-new project which will revolutionise the bustling area of Liverpool, continuing the Baltic Triangle’s ongoing regeneration. Featuring a dedicated indoor space with a standing capacity of 2,000 and seated 1,200, alongside a shipping container village to be later built around the philosophy of Music, Art, Drinking and Eating: MADE,
Content is an inclusive community-focused social space serving the entire locality day and night.

BONGO BINGO HAS A NEW HOME

Content will very proudly be the brand-new and exclusive home of Bongo’s Bingo. Debuting at the venue along with the irrepressible host Jonny Bongo himself is by far the biggest ever star to grace the stage for the ground-breaking global phenomenon – the sensational Kelis is making a very welcome return for the grand opening on Friday 9th and Saturday 10th August. When Jonny Bongo and Joshua Burke created Bongo’s Bingo back in April 2015, they never foresaw American superstars dropping into join them to party. And yet incredibly Kelis is back again in Liverpool at Bongo’s Bingo. Years of chart dominating songs and thrilling, boundary pushing music has resulted in millions of albums sold and numerous top 10 hits. She has released six albums, won Brit, Q, and NME Awards, and been nominated for two Grammy Awards. Kelis has toured every corner of the world, performed at every major festival, and shared the stage with the world’s top artists, and alongside her music she is also a Le Cordon Bleu trained chef. Jonny himself is hosting all 8 shows throughout August, with more dates to be announced soon for September and into the autumn.
?
Previous Article

A Q&A with Pilgrim Liverpool